I hear that the first concert at the new Yankee Stadium will be in September, with Jay-Z and Eminem presiding. Not that I'm a big stadium-show type of person, but I've often wondered if there was a specific reason why the old stadium never had quite as many concerts as Shea. Its wikipedia entry lists only a few:

The first concert ever held there was an ensemble R&B show on June 21, 1969, put together by the Isley Brothers; the first rock concert held at the stadium was on June 22, 1990, by Billy Joel. It was also the site of two dates of U2's Zoo TV Tour in 1992. During one song, Bono paid tribute to the show's setting with the line "I dreamed I saw Joe DiMaggio/Dancing with Marilyn Monroe...". Pink Floyd also performed two sold-out shows at this venue on their final North American tour in 1994 in support of their album The Division Bell.


I'm enough of a geek to own up to being at one of those U2 shows. I don't recall the Joltin' Joe reference, but I do remember the drunken louts (not necessarily of the Irish persuasion) beside us in the nosebleed section singing very off-key harmonies during "New Year's Day," and I did think Bono's interaction with the belly dancer during "Mysterious Ways" looked pretty cool. Anyway, the wikipedia authors left out a Fania All-Stars show there on August 23, 1973. And they're wrong about that Isleys event being the first. I know of at least one show prior to that--Soundblast '66 on June 10 of that year. Dig these posters from a Cowsills fansite...I assume the Mom-less and kid-sister-less garage lineup of the group, of "All I Really Wanta Be Is Me" infamy, had to be the ones making this scene. 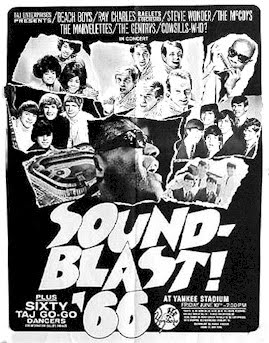 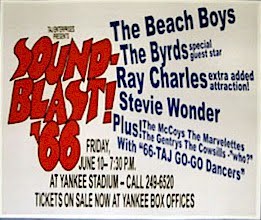 Had I been a living caveteen at the time, the very thought of that bill would have knocked my knee-socks clear off--but Richard Goldstein's evocative review from the 6/16/66 issue of the Village Voice reports that it was actually more of a bust than a blast. Christopher Hjort elaborates a bit more in So You Want To Be a Rock 'N Roll Star: The Byrds Day-By-Day 1965-1973 (London: Jawbone Press, 2008):


The Beach Boys headline this concert at the enormous Yankee Stadium. The venue has a capacity for 70,000 but has sold only a disappointng 9,000 tickets, despite the varied bill. The concert...advertised to begin at 7:30, does not get underway for almost an hour and a half after that time. Appearing in chronological order are the Cowsills, the McCoys, the Marvelettes, the Byrds (who are a recent addition), Jerry Butler, Stevie Wonder, and the Jimo Tamos Orchestra. Ray Charles and the Beach Boys are saved until the last. The Gentrys and the Guess Who are billed but presumably do not appear. Jonathan Randall in the New York Times (June 11) reviews the happening but writes mostly about the 66 finalists in a dance contest who ride around the bullpen on bicycles, demonstrating a new dance called the Bike.

I'm not so sure the Guess Who (or even the Who for that matter) were actually billed...I think the "who?" notation on the poster is a reference to the Cowsills' obscurity at the time. The gettyimages site has quite a few pictures of Ray Charles' set, and a handful of Byrds and Beach Boys pics.

With respect to the number of concerts at Shea vs the number at the old Yankee stadium, I suspect the principal issue was stadium ownership. Its my belief that Shea was city-owned, and thus NYC had debt to service (even if it was merged with general municipal budgetary items). Hence a financially remunerative rock concert, or football game, or anything, was always desirable. I suspect any promoter who could meet Shea's price and not conflict with the Mets or Jets could use the venue.

I think Yankee stadium was Yankee owned, and they had no imperative to find additional paying customers. I think if you looked at the times when their were bowl games, boxing matches and so forth at Yankee Stadium, they coincided with eras when attendance lagged during the baseball season.

As long as the Yankees were drawing 3-4 million and had a huge tv contract, they didn't have an imperative to use the stadium. Conversely, regardless of how the Mets were doing, Shea was a city facility and NYC would always have sought the rental revenue.

I don't recall the financial obligations of the new Yankee stadium, but if you figured them out (and Citi Field) it would tell you how many concerts to expect over the next decade.