All apologies for not posting--been otherwise occupied as of late.

Came across a couple of references to the Hotel Diplomat recently. MuchMoreMusic, Canada's answer to VH-1, occasionally shows some VH-1 programming, and a few weeks ago they aired When KISS Ruled the World, a pretty good doc on the band's origins and heyday. Here's what the Starchild, the Demon, and their minder had to say about one of their earliest venues:

Paul Stanley: We found the Hotel Diplomat, which was basically a cheap hotel right off Times Square which seemed to cater to hookers, drug addicts, and people who needed a room for an hour with very crispy sheets.

Gene Simmons: I put together a mailer with Paul--"KISS playing at the Diplomat Hotel Ballroom"--and I sent that out, must've been a thousand copies, to everybody in the television industry, managers, record companies, everybody...

Bill Aucoin (then-manager): They were playing the second floor ballroom, and we actually had to step over broken stairs, and there were holes in the floor.

Also caught Fame on one of my movie channels recently. Since I hadn't seen it in over 20 years, I kinda forgot that it wasn't all about spontaneous song-and-dance outbursts in the lunchroom and on car hoods in the street--quite a lot of late-'70s NYC grit and seediness made its way into the flick, including yet another Hotel Diplomat reference:

Ralph Garcey (a.k.a. Rafael Garcia): Hey Doris, listen, I, uh, I meant to tell ya, there's, uh, there's an open call for a movie at the Diplomat Hotel.
Doris: Oh yeah?
Ralph: Actually, what they're doing is, they're looking for your type for a movie.
Doris: What's my type?
Ralph: Well, y'know, your type--Irishy, Jewishy, paranoid...
Doris: What's the name of this movie?
Ralph: I Was a Teenage Fag-Hag.

I've been to NYC four times since November, mainly to deal with matters (and madness) pertaining to settling my father's estate. The bulk of these trips were spent stranded and insanely busy in Queens, but I did manage to spend a few "days off" gallivanting in Manhattan. One of the hi-lites of my MLK Day shopping/wandering trek was the chance to check out a small exhibit of Mick Rock pictures at the Soho Grand Hotel's gallery. On my way there I passed another Soho gallery whose existence was previously unknown to me--Morrison Hotel, a rock photography outlet, who coincidentally represent Rock and were co-sponsoring the Soho Grand show. Great as all the photos were, they looked a little outta place in such stark rarefied surroundings--they're better suited to the walls of Manitoba's (or Wowsville, R.I.P.).

A couple weeks ago my husband and I were able to dovetail one of my "business trips" with the Reaction Weekender, a 3-day '60s DJ fest put on by Josh Styles and Layla "Peppermint Twist" Lozano, the couple behind NYC's "monthly freakout," Smashed Blocked. We flew down and stayed at the same hotel with our dear galpal Sophie Au Go Go, a fellow erstwhile (though not native comme moi) New Yorker/current Torontonian. A splendid, sweaty, sloshed, tuneful, and terpsichorean time was had by all at each of the four packed venues, and I had a blast catching up with old buddies and meeting new folks from all corners of the '60s-enthusiast world. [Check out Tony El Tigre's photos--including one in which I look hideous but happy, clearly basking in the reflected glory of my heroine, Miriam Linna.] 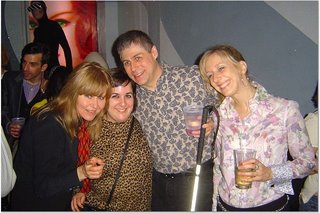 Since Josh and Layla didn't start putting on their night until after I moved, I hadn't previously met them or most of their circle, which includes the Dansettes, a soulful guy-backed gal trio who performed at the event's culmination on Saturday night. Like the proverbial prodigal daughter I am, I've admired them all from afar in the meantime, but I kinda feel super-shy and outta the loop where they're concerned...and I probably was a little too quick to point out to those newer NYC scenesters I did manage to meet that I'm not from Toronto, I just live there--but I couldn't help myself. All were super-nice and understanding about it, though, particularly the lovely, gracious Layla herself, whose dark, wavy-haired good looks and infectious smile reminded me of Lori Lightning Maddox. Not to imply that Ms. Lozano is any sort of a groupie, but if you have the slightest idea of how groupie-obsessed I am, you'll know that's a compliment. Speaking of groupie obsessions, by sheer coincidence Miss Pamela was in town promoting the new edition of I'm With the Band, and despite a torrential downpour I couldn't resist attending her reading/signing/meet & greet at Coliseum Books, featuring special guests Patti D'Arbanville and Sandra Bernhard. Neither could I resist shelling out for a copy of the book and standing on line for my chance to be a blithering idiot fangirl before her, even though I'd recently purchased a half-priced copy back at T.O.'s BMV! We were sitting about two feet away when these WireImage shots of her with Bernhard and Gabriel Byrne were taken. While we were celeb-stalking, Sophie was busy scoring some Ossie Clark originals at a vintage clothing expo I'd hipped her to at the Metropolitan Pavilion. Thrills galore, I tell ya.

Had to spend a few extra days in Queens myself to take care of mo' bizness, but I did manage to slip away for a few hours later in the week, during which I took in The Downtown Show at NYU and its sister exhibit, Anarchy to Affluence, at nearby Parsons. While the art was cool in and of itself (one of those menacing life-sized black graffitti silhouettes, ubiquitous in the '80s, was painted right on a wall--of course I'm blanking out on the artist's name), I was particularly taken with the amount of rock & roll content on display. Issues of Punk Magazine and New York Rocker were tantalizingly laid out under glass...New York Rocker # 1 featured the headline, "MICHAEL BROWN on the right banke." Lots of rock & roll flyers and posters were on display at the Fales Library portion of the show, some advertising gigs at places I'd never heard of--including The Sea of Clouds (5 E. 16th Street, 5th floor--a New Year's Eve party with the Heartbreakers, the Ramones, and Wayne County DJ-ing), the Squat Theatre (256 W. 23rd Street), Tier 3 (77 White Street), and unnamed storefronts at 52 White Street and 204 E. 7th Street. At the low price of an optional 3-buck "suggested donation," this exhibit is not to be missed--especially if you're the type who frequently pored over the likes of Details, Paper, the Voice, and/or Art After Dark to add a little pseudo-sophistication to your callow adolescence.
Posted by Signed D.C. at 6:43 AM No comments: