1967 Ads: The Group Image at the Palm Gardens

I have to admit I'd only heard about the Group Image in passing prior to time-warping deeply into Voice '67, so I'll leave the explanations to the professionals.


From rateyourmusic.com :
The band played for two years in various locations in Manhattan, NYC, including its own productions/shows at the Palm Gardens, and the Cheetah Club, shows with the Grateful Dead in Central Park and the Fillmore East, and other outdoor shows in parks such as Tompkins Square Park in the East Village. It was part of a larger group of artists by the same name, who participated with light shows and various other activities. Various other artists such as Tiny Tim and Wavy Gravy participated in the shows from time to time, as did the Diggers and other "alternative live style folks." After it disbanded, Leon Luther Rix went on to play with many artists including Bette Midler, Bob Dylan, and the show Rent. Doug Metzler went on to play with Country Joe & The Fish. Sadly, Paul, who played double-necked rhythm guitar, and occassionally other instruments as well as back-up vocals, died in an accident in 1967, not long after the band broke up.

Village Voice "Scenes" column, 7/13/67:
The Electric Circus was shocked last week when posters appeared throughout the East Side last week advertising a free dance with the Group Image. They had, after all, agreed only to an audition, but the Group Image needs an audience to do their thing. The Circus theatened to call the audition off, but when several hundred happy hippies responded to the invitation they relented and let them dance. Despite the group's growing fame (last week's cover of Time magazine), many of the local pop spas have found the Group Image a little unwieldy, and the Image, in turn, doesn't like the static they've been picking up. Their present plans are to return to the freak-outs through which they first emerged in the spring. The first will be at the Palm Gardens on Wednesday, July 19, 9 p.m. to 1 a.m. Admission will be $1.50.

Village Voice "Scenes" column, 8/17/67:
It was their big chance. The management of the Electric Circus was impressed with the Group Image as they played to thousands in St. Marks Place Saturday night, and offered them an audition, in the form of a free dance, Sunday afternoon. The psychedelic tent was overflowing the next afternoon, but the Image was irked. The air conditioning, they complained, was off and the bathrooms were locked. They paused to tell the audience that "the Electric Circus sucks." That blew the audition, but the band played on, pausing occasionally for another insult. It was getting pretty raunchy. But the Circus had the last word. A hastily lettered slide flashed on to the screen behind the stage. It read "The Group Image Sucks." And the Image, amidst a forest of erect middle fingers, packed up and left.

Village Voice "Scenes" column, 8/31/67:
Noise is the major issue. "Even the Group Image wouldn't live on the block," Bernie Hamtman, a [St. Marks Action Block] Committee explained. "The Electric Circus is overloaded and not soundproofed...If the laws were enforced, it would be shut down."...Hamtman said with a smile that the committee was thinking about promoting an "Electric Circus" featuring "The Group Mirage." The Group Mirage, he explained, were invisible hippies.

The "Scenes" column in the 9/7/67 has a brief report on a pot bust that landed a few Group Image and Diggers members in an upstate jail. And in the 11/23/67 issue, the column reports that the Parks Department had given the Group Image permission to organize a free pop festival at Flushing Meadow Park, to be held over Memorial Day weekend in '68. It was to be called the "First Memorial to the 20th Century Environmental Pops Festival," and "[t]o help out, a committee is being made up of important music business executives. A lot of top groups from both coasts have already agreed to appear. Not only music, but all kinds of kindred art and media will be showcased...The Group Image has chosen a slogan: Come to Flushing Meadow and Dance on the Grave of the World's Fair." I'm fairly certain this didn't actually came to pass...I'd surely have heard about it by now.

I haven't been able to locate any historical details on the Palm Gardens (310 W. 52nd Street), but this first ad seems to indicate it was an old ballroom/dancehall. 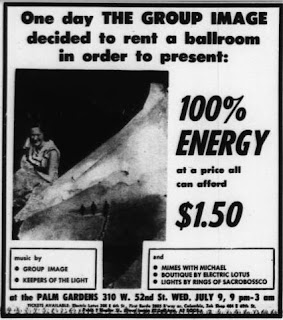 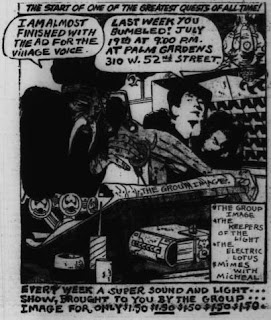 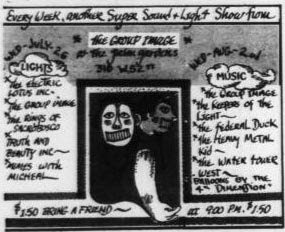 7/27/67 issue: The Electric Lotus, the Group Image, the Rings of Sacrobosco, Truth and Beauty Inc. on 7/26. The Group Image, Keepers of the Light, the Federal Duck, the Heavy Metal Kid, the Water Tower West on 8/2. 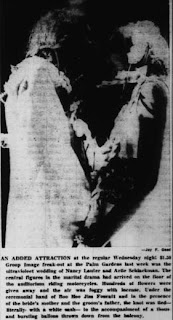 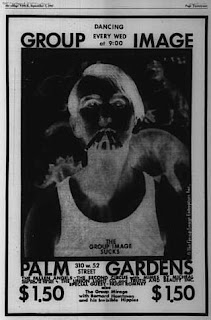 9/7/67 issue: The Fallen Angels, the Second Circus, "special guest Hugh Romney," and "the Group Mirage with Bernard Hamtman and his Invisible Hippies." 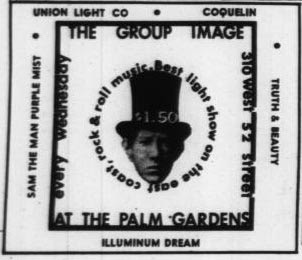 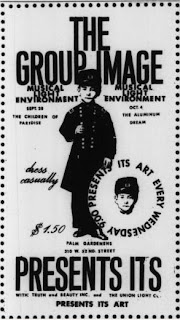 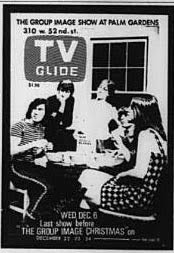 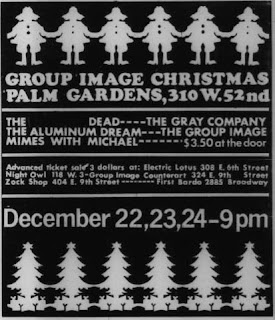 Anyone remember dances on Wednesday nites at the Palm Gardens...hand stamp "Flake".... I made a wedding dress for someone in the group image... I think I remember her name might have been Nancy... don't know if she eventually wore it... I was 19 and a beginner at best,,,

I found a 1939 photo of part of the Palm Gardens at http://tinyurl.com/62jsauw (the first of the two photos). The sign out front says "Palm Garden To Rent for Balls Receptions Entertainments Conventions etc. Large Stage" and more that's too small to read. According to Certificates of Occupancy going back to 1922 the second floor was a balcony. I'm guessing in 1967 it was the same building considering it had been a dance hall for so many years. Whatever was there in 2004 was torn down and replaced by a 42-story luxury condo tower. sigh...

I forgot to mention, according to a 1/25/68 column by Earl Wilson, Broadway columnist for the Middlesboro Daily News, The Cheetah "will move" from B'way and 53rd to 310 W 52nd. Another source said it they'd move in March 1968.

Thanks a lot IM! Within the next couple of weeks I hope to put up a revised version of this post, with larger illustrations, and hopefully more info if I can dig anything else up.

But wait! There's more! A small mention in the 7/10/04 Billboard led me to a website for Studio Instrument Rentals who moved into 310 w52nd in 1974. There's a picture of the entire front of the building at http://www.sir-usa.com/photos-history/3-pix-horiz_02.jpg. It's from http://tinyurl.com/3mrnqqw but the picture there is much smaller than the direct link. The 2004 Billboard article mentions they sold the building to an investment group. This was the group that built the condos.

I'd love to know what was there in between the Cheetah and SIR. Maybe an email to SIR is in order!

I lives in NYC at that time.
Remember them well.
Great shows...a sadly underrated and overlooked band.

our group from the bronx would go each wednesday night to Palm Gardens. Sometimes we would be splashed with tye dye when entering sometimes with something more mind expanding. Come late in the night , while hundreds dancing holding hands in circles.the light show intencifying, down came mountains of confetti., swimming in. confetti.,, Sheila , one of the many women who would dance unencombered by clothing, told me pigpen, could't preform, and could I sit in with the dead. That was a high point. If you missed a week at the palm Gardens, bring a note. bluesboyman Martin

Hey Artie, How you doin? Drop me a line if you'd like to catch up. In recent years I've seen Nancy, Willie, and Luther, and talked a bit with Sheila and Rick. (Tried to say hello to them when I was in CA but didn't work out.) Hope you're fine.
Doug
(another GI original).