Yes, here's yet another update to an old post! I was recently contacted by one LHM, who got a kick out of my Murray the K show essay, and generously offered some memories of his own along with a couple of choice pics from the "Music in the Fifth Dimension" Easter '67 show.

I count myself VERY LUCKY to say that I witnesed the American debut of THE WHO at the Murray the K Easter Show at the RKO 58th Street Theatre. On Monday, March 27, 1967 I was 14 years old and in the 9th grade. My friend Dan S. and I were on line by 6:30 AM to get the best seats, but we wound up in the 5th or 6th row. Still, it was a great place to be to see history in the making.

Quite frankly, most of the acts I saw that day are a blur to me now, except for the short but riveting performance(s) by the Who. There was something so raw, cool and aggressive about them and their sound that they stood out miles ahead of the other performers. The Who had "IT" and for a 14 year old, the Who was the epitome of Rock and Roll. Pete's windmills and guitar smashed-ups were astounding and I remember to this day the pungent smell of smoke when they finished their sets that day -- yes, I could smell the smoke bombs from the 5th row!

Attached is a photo I took of the Who at this show, I regret that I only took one picture. The other attachment is a full page ad that appearead in the New York Daily News on Sunday, March 26. 1967. 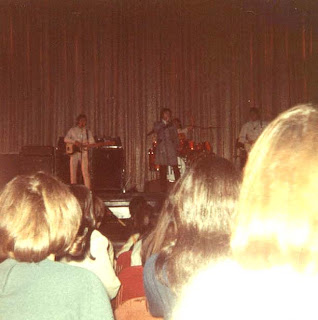 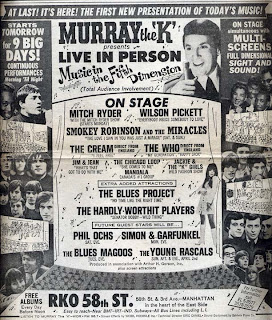 The live shot reminds me of a set of '60s Who pics I saw a while back, taken at the Indiana Beach club in Monticello, Indiana. Which in turn remind me of all the shots I try to take at shows but inevitably wind up with better views of backs-of-heads than band action...except instead of some garage punk unknowns, it's the bleedin' 'Oo up there in between all the heads! (Make sure to check out the incredible and back-of-head-free '66 Yardbirds pics on the next page of the same site.)

As it happens, late last year while looking for more info on Murray I found this wonderful blog post on the '67 Easter show. It's part of a growing and graphically-rich site called Talkin' About My Generation, which features the first-person rock & roll reminiscences of one David Gross. Required reading!

And since we're on the subject of Brit Invaders, I should share a tidbit I was ignorant of until a few days ago. Seems that as part of the promotion for their flick Catch Us If You Can (a.k.a. Havin' a Wild Weekend), the Dave Clark 5 made appearances at the Richmond Hill RKO Keith's, and possibly the Flushing RKO Keith's as well!!! I can't quite tell from the comments I've seen whether these were actual concerts or just personal appearances, but I'm pleased as punch the DC5 touched base in my home borough either way.

Speaking of Brits in Queens, I might as well throw this query out there and see if anyone bites as I've been darn curious for a while. According to the Hollies' '60s tour schedule, they played a location in Flushing on December 8, 1967. I'm thinking it was Queens College as they toured through quite a few U.S. colleges around that time, but does anyone know for sure?

Other updates: Steve Paul's the Scene has its very own Facebook page, and it's been active for about a year now--how come I only found out about it today? Also, it looks as though that "Tent of Tomorrow" the New York Pavilion may see some tomorrows after all.
Posted by Signed D.C. at 7:59 AM 5 comments: