Here are the fruits of my new favorite time-waster--endless wading through Google's online Village Voice archive! I semi-arbitrarily started with 1967, mainly because my favorite year of 1966 is not yet archived. I'll go back to '65 (and other prior years) at some point, but quick advance peeks at a couple of that year's issues show that the listings in the "Clubs/Cafes/Coffeehouses" section were pretty slim at that time. Actually, even the '67 sections weren't nearly as jam-packed with ads and data as I was hoping they'd be...but that's probably a blessing in disguise lest I spend even more time at this than I oughta!

In this series I intend to post as many ads as I can find on the various venues that interest me. I'm concentrating primarily on rock and roll venues and performers of course, but there will be a bit of crossover--e.g., ads for jazzbos or folkies at rock venues, and/or ads for rock-types at jazz/folk clubs if they happen to catch my eye. (I'll sidestep the Cafe au Go Go since it has been thoroughly covered elsewhere.) Yet I cannot promise total completist behavior. Some issues are missing, certain ads weren't always printed every week, and there are times when even my eagle-eyes fail to spot things! And of course, one cannot assume the events always transpired as advertised. In the captions I'll list the issue date and the bands mentioned in the ad.


While researching for the Rolling Stone post, I was stunned to learn that Trude Heller had a second discotheque at Broadway and 49th Street called the Trik. Trude Heller's original club at Sixth Avenue and 9th Street was one of the first places I wrote about here, and though I scoured all the resources then available to me, I failed to learn about this second outpost at that time. The name was referenced in one of the books I'd consulted, but was applied to the original place...and somehow I completely missed its brief mention in The Warhol Sixties until just last week. Luckily the Voice had a few ads to set me straight...but either the club didn't last very long or it didn't advertise much, for I found ads/mentions only in the issues spanning April to August of '67. 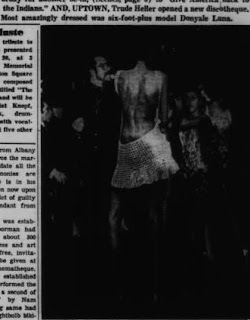 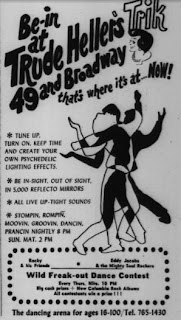 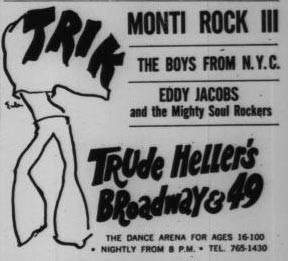 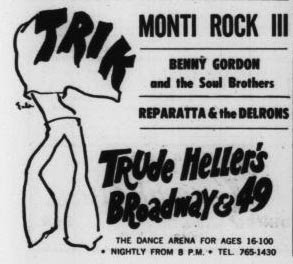 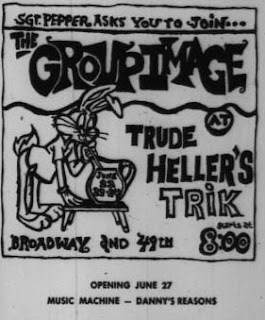 6/22/67 issue. The Group Image, Music Machine, Danny's Reasons. The club is also mentioned in this issue's "Scenes" column, in a discussion on the expected summer influx of teen hippies: "Trude Heller, owner of the Trik, says if the hippie invasion becomes critical, she is considering making the place available for a Sleep-In. 'After hours, the Trik would be used for supervised sheltering of the hippies until they find other lodging or return home.'" 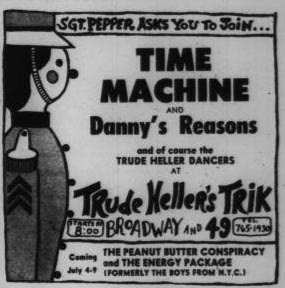 7/27/67 issue. Keith and the Wild Kingdom, the Daiseys, the Stonehenges.

I GOT A JOB AS A GO GO DANCER THERE IN 1966/7
TRUDE HERSELF AUDITIONED AND HIRED ME.... I WAS TOO YOUNG TO GET A NYC CABARET CARD , SO THEY LET ME GO...LIVE BANDS AND RECORDS CATERING TO A DANCING CROWD ..
WE WERE THE TRUDE HELLER DANCERS

I played in the Pleasant Street Blues Band and sang as J.J. Lancaster at both the Trik and Uptown clubs. We had Salvadore Dali as a regular at the Trik. We also opened a club on St. Mark's called "The Electric Circus" as a last minute replacement for Nico and the Velvet Undergound (seems Nico was "sick" that night) so it was a rush job. I loved N.Y.C. back in the mid 60's. I also remember the dancers (at the Uptown only).