Remembrance of Greek Omelettes Past

It's been a long time since I've written a proper post, and it may be a while before I get back into the full research mode required to write a decent one. Nevertheless the urge to write something is coming on strong, so lemme get a little more personal and fulfill this blog's other stated mission of presenting my "moronic musings on various other enthusiasms." First up: I'll channel Gael Greene and discuss the reopened Lakeview Lunch, or as it's now officially known, The Lakeview. 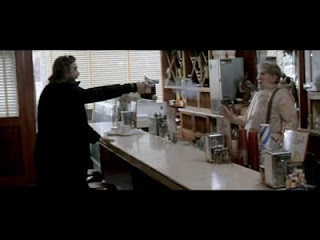 The Lakeview was my husband's and my mainstay diner ever since we moved to Toronto in 2001. The combination of original circa-1947 fixtures, friendly staff, and tasty food kept us as perpetual regulars, even while other folks' attendance had dropped off sharply by the mid-aughts. (Apparently by the end they were making more money renting the place out as a movie location than they were as an operational restaurant!)

We ate breakfast there almost every Sunday morning (gawd only knows how many Greek omelette calories that computes to), unless we were out of town--or unless it was closed down (briefly in 2005, more permanently from August of this year until just this past week). And we could count on it being open for lunch during certain holidays when most other joints weren't (lord only knows how many chocolate shake calories that computes to!). Others may beg to differ (and perhaps I've got whacked-out tastebuds and a high tolerance for ineptitude, who knows), but somehow we never had a bad meal or a lousy experience there.

We were saddened but undaunted when it closed down. In fact, I must've had a weird premonition about its closure, 'cause shortly before it happened I'd thought that I ought to bring my camera one of those Sundays--which I naturally never got around to, the decor being seared into my retinas through long-term exposure anyway. After some trial and error with other breakfast joints we discovered that Sneaky Dee's weekend brunch suited us super-fine. (Surprising, as I've always considered their take on "Tex-Mex" to be bland at best, but after sampling their terrific Thanksgiving dinner this year we knew brunch had to be worth a shot.) We became cautiously optimistic when we heard the Lakeview was being taken over, restored, and re-visioned. While the new owners had plans for more upscale fare and clientele (and swank cocktails), their hearts seemed to be in the right place--at last those patched up seats would get recovered, among other much-needed cosmetic refurbishments. Yet our hearts sank when Rocky found this disgustingly smug opening-night report. Don't get me started on the utter ludicrousness of comparing Dundas-Ossington to either the East or West Village of ANY era, O.K.??? As swell as it is in its own way, you KNOW I oughtta know the difference better than most, even if I didn't intern at GQ or dine at Odeon in my callow youth...

Still, we had to try it, so we went for breakfast this past Sunday. I normally can't be bothered with makeup on a Sunday morning but I actually felt compelled to paint some eyeliner on lest the hostess turn us away for not being "beautiful people" enough!!! Contrary to my fears, all the staff we encountered were friendly and eager to please. And the restoration and freshening of the decor was just to my liking--so bright and airy now, where the old place could admittedly appear rather dark and drab to the uninitiated. (Miss the vintage movie posters, but whaddaya gonna do?)
But I wasn't so thrilled with the breakfast card. There were about 4 or 5 items tops, with nary an omelette or pancake or waffle among them. I suppose they want to cater more to the late-night crowd, but don't they realize that brunch is a BIG DEAL in this town? Perhaps a special brunch menu is "in development." I settled for scrambled eggs and sausage, and Rocky ordered the "eggy in the middle" which was a fried-eggs-within-toast concoction. Both came with home fries, a small mixed mesclun salad, and a nice little fresh fruit cup with berries, granny smith apple chunks, and banana slices. The plates were adequate, but nothing knocked our socks off taste-wise--truly odd considering all the food-gasms I'd had in that same building, nay, AT THAT VERY SAME TABLE over my frequent feta-and-tzatziki-laden Greek omelettes. And while I respect the owners' need to make a buck, charging 50 cents per coffee refill is mighty low, and certainly verboten in the true diner code.
Now that I can get my food-gasm fix over Sneaky's choose-your-own-omelettes (feta and mushroom being my personal fave combo), I doubt we'll be back to the Lakeview for breakfast anytime soon, unless or until they add some more creative dishes to their breakfast offerings. However, the dinner and drinks list looked intriguing enough for a return visit, which I'll be making with one of my best galpals later this week. (They even cutely named a couple of dishes after the dearly departed Stem and Canary.) Old habits die hard, and though I may not fit in among the hipsters they're hoping to attract, the place still calls to me somehow. 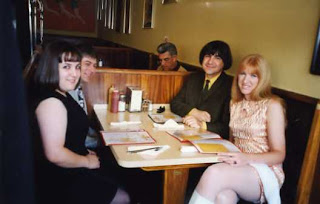 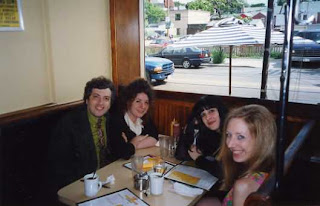 Images from my first-ever Lakeview visit--lunch prior to the wedding of our pals Erin and Dave, July 2001. Top: Me (ignore my giant arms and second chin!), Rocky, unknown interloper, Richard, Glynis. Bottom: Flipped Out, Sophie C., Mimi, Sophie-a-Go-Go.