He will save rock and roll 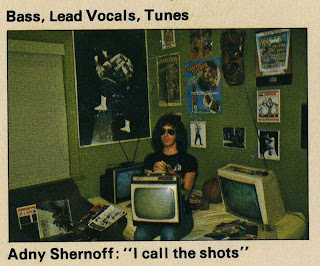 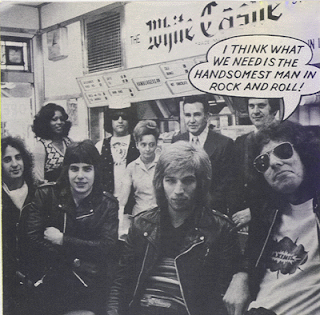 If you get the chance to see Andy Shernoff's solo acoustic show, run don't walk, do not pass go, do not collect $200! Here's the official description, from the invite I got to his Toronto gig last night at Mitzi's Sister (partly accompanied by Teenage Head's Gordie Lewis), via the "Andy Shernoff Appreciation Society" facebook page.
When Giants Walked The Earth--a musical memoir by Andy Shernoff
It's a narrative about growing up in NYC with Johnny Thunders, early days playing music, touring the UK in 1977, working with Dee Dee, people who covered his songs like Dion and Mary Weiss from The Shangri La's, being with Joey Ramone in the hospital when he died, up to the currrent sad state of rock and roll...Join the "Christopher Columbus of punk rock" as he performs all his monster hits while regaling the audience with tales of the glory days of rock and roll when sex was safe and drugs were cool.
I know what you're thinking--"Dictators Unplugged." Yeah, it's partly that, and hearing those songs as songs, sung with finesse as opposed to HDM's drill-sergeant delivery, is indeed strange and revelatory. But it's so much more. I might be in a state of Kinks konfusion at the moment (I'm currently working my way through their day-by-day khronology by Doug Hinman, and am listening to Something Else as I write this), but the show reminded me a lot of Ray Davies' '90s solo outings, albeit a tad less theatrical...and Andy's tales have an off-the-cuff feel, while I distinctly recall that Ray often read directly from X-Ray during his spoken-word bits. At any rate, I don't wanna give too much away but the show is a veritable New York rocker's paradise--possibly particularly moving if you're in that subculture's Queens division. Don't miss it!

[EDIT 6/19/2010: I guess I wasn't too far off with the Kinky komparison...here's an excerpt from a gomemphis.com article: Shernoff's "storytellers" set began as a residency at a small club in New York, but soon grew in popularity. "So I got serious about putting together an actual show; there's a basic outline, but a lot of it is improvised," says Shernoff, who has described his current incarnation an "insensitive singer-songwriter or Ray Davies with a White Castle slant."]

One of Andy's stories had to do with seeing Iggy and the Stooges at Max's in '74 or so. I don't know if he was aware of this, but about a week from now Ig & co. will be turning Toronto into the center of the rock & roll universe, when they do a FREE SHOW at Yonge-Dundas Square as part of the North by Northeast festivities!!! NXNE seems to be getting bigger and closer in stature to its Austin cousin every year. I wasn't sure if the bookers could possibly top last year's free Sonics extravaganza, but they've managed to outdo themselves big time...we not only get a dose of free Stoogemania, but there's also a free Mudhoney and X show a couple days prior to that! But man, the Stooges...we schlepped to NYC to see the Asheton incarnation at Little Steven's Randall's Island fest a few years ago, and shelled out pretty big bucks to see them again at Massey Hall in 2008, so it'll be extra-gratifying to see the Williamson edition for peanuts. They're showing the Making of 'Raw Power' doc at the NXNE film fest too, but we were able to see that at a free preview as well. With all this Stoogenerosity I certainly don't mind buying a ticket for the Kinks-related Do It Again doc.
Posted by Signed D.C. at 12:53 PM

chrry said...
This comment has been removed by a blog administrator.
11:55 PM