Selected Voice ads for Steve Paul's the Scene, July through December, 1967. (Some issues were missing from the archive, and sometimes ads weren't printed every single week--that and possible eye failure on my part account for any ads missing here!) 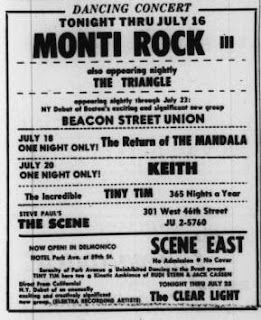 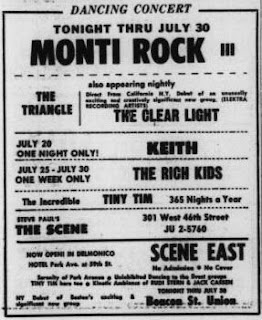 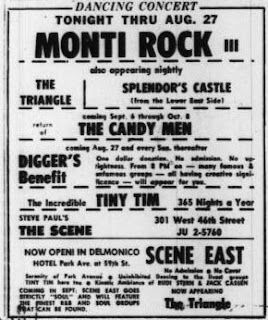 8/17/67 issue
Monti Rock III (thru 8/27) with the Triangle and Splendor's Castle
The Candy Men (9/6/to 10/8)
Digger's Benefit, August 27 and every Sunday thereafter. "One dollar donation. No admission. No uptightness. From 8 p.m. on--many famous and unfamous groups--all having creative significance--will appear for you."

Scene East: The Triangle. "Coming in September, Scene East goes strictly 'soul' and will feature the finest R&B and soul groups that can be found." 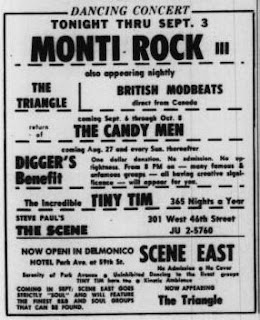 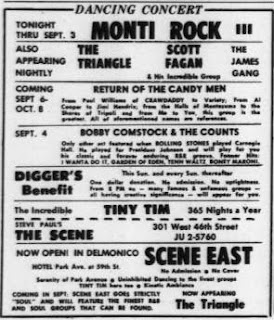 I imagine Steve Paul himself wrote the ad copy, which started getting very wordy and effusive for a few weeks here. I hope you can read it, 'cause while I haven't got it in me to type it all out, it's pretty darn amusing. 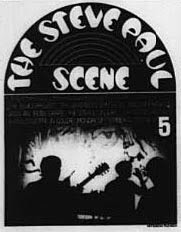 8/31/67 issue
Ad for The Steve Paul Scene TV show on WNEW Metromedia Channel 5. This was very hard to read even on the site, but I could make out the Blues Project, the Chambers Brothers, Aretha Franklin, Janis Ian, Moby Grape, the Staples Singers, and the Young Rascals. Looked like the broadcast date was Monday, September 4. from 8 to 10 p.m. I watched it once at the Museum of Television, but it has probably been bootlegged on DVD as well since then. (Incidentally, I also spotted an ad for a WOR-TV Channel 9 show called "From the Bitter End" in the 12/28/67 issue.) 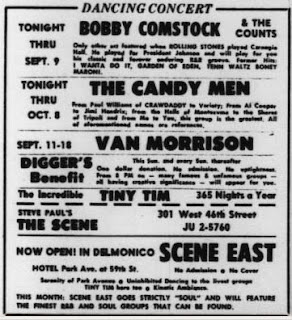 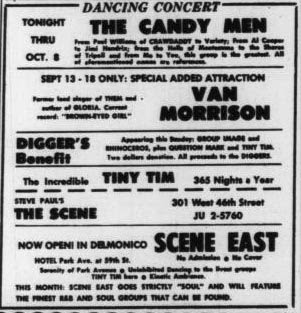 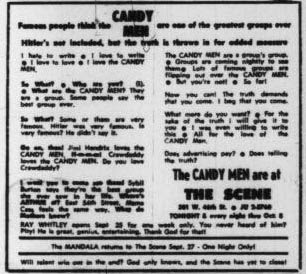 No more mentions of Scene East from now on, so I gather it was a short-lived venture. 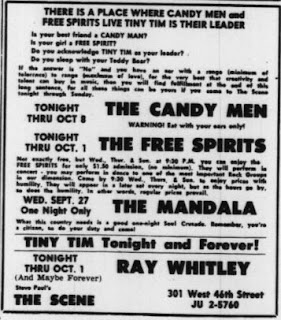 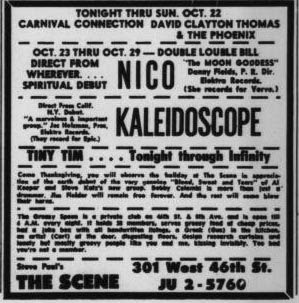 10/19/67
Carnival Connection and David Clayton-Thomas & the Phoenix (thru 10/22)
"Double Louble Bill": Nico and Kaleidoscope, 10/23-29
Announcements for upcoming Blood, Sweat & Tears debut (the pre-Clayton-Thomas lineup), and "The Greasy Spoon," which sounds like the Scene's version of the V.I.P. room. 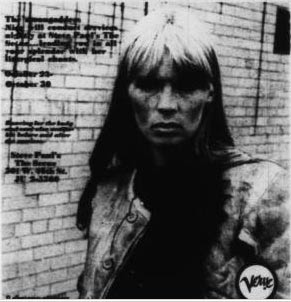 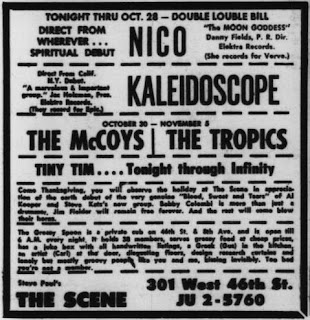 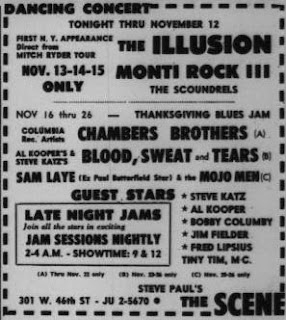 11/23/67 issue
Thanksgiving Jam, but John-John McDuffy and the Soul Purpose replace Sam Laye & the Mojo Men as listed in the previous ad. 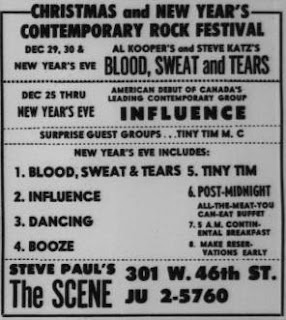 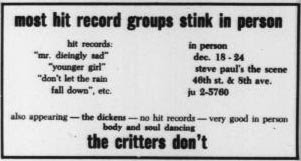 明文明文 said...
This comment has been removed by a blog administrator.
10:48 PM