I've had two Tiny Tim-related encounters recently.  One involved re-reading the liner notes to the More of the Cake Please CD, as posted on Dangerous Minds a while back.  Oddly enough, the original version of "Baby That's Me" came on the WFMU Ichiban a few moments ago, but I digress:

One night they ended up at The Scene, a midtown Manhattan venue that had become one of the hippest after hours clubs in the city. The Scene was a regular haunt for 16-year old Eleanor Barooshian, a slight, cute-as-a-button blonde with a big voice and a ballsy attitude. She had befriended the club’s flamboyant impresario Steve Paul and could often be found performing there, running through a riotous little routine with house act Tiny Tim. They sang a role-reversed version of the Sonny & Cher duet, I Got You Babe. The sight of a young girl singing baritone to a ghastly-looking fellow with a shrieking falsetto brought the house down every time.
‘We just did it as a lark,’ says Eleanor, now known as Chelsea Lee. ‘Everybody liked it so much it became a thing. People would ask, ‘Are you and Tiny singing tonight?’ The same routine was later immortalized in Peter Yarrow and Barry Feinstein’s impressionistic 1967 documentary, You Are What You Eat.
‘The whole idea of a relationship between Tiny Tim and a young teenybopper was inconceivable,’ says Yarrow. ‘It was like a Dadaistic expression. A teacup lined with fur. [That performance] was about the absurdity of that conjunction on one level and yet, at the same time, it was highly sympathetic.’

And I was also recently contacted by author Justin Martell, who is working on a biography of Tiny Tim, which is sure to shed more light on his Scene stint.  But for now, let's examine the final year in the club's history. 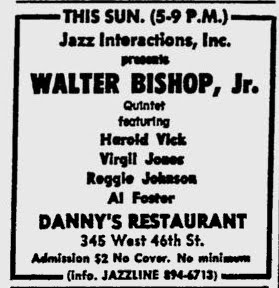 
UPDATE 5/8/2013:  Jeremiah's VNY reports that 301 W. 46th Street is slated for demolition. Also, learn a bit about the Scene's predecessor, the Cave of the Fallen Angels, at Gotham Lost & Found.