1967 Ads Revisited: The Group Image at the Palm Gardens

First, I'll recycle a few quotes from my June 2010 post on the Group Image.


The band played for two years in various locations in Manhattan, NYC, including its own productions/shows at the Palm Gardens, and the Cheetah Club, shows with the Grateful Dead in Central Park and the Fillmore East, and other outdoor shows in parks such as Tompkins Square Park in the East Village. It was part of a larger group of artists by the same name, who participated with light shows and various other activities. Various other artists such as Tiny Tim and Wavy Gravy participated in the shows from time to time, as did the Diggers and other "alternative live style folks." After it disbanded, Leon Luther Rix went on to play with many artists including Bette Midler, Bob Dylan, and the show Rent. Doug Metzler went on to play with Country Joe and The Fish. Sadly, Paul, who played double-necked rhythm guitar, and occassionally other instruments as well as back-up vocals, died in an accident in 1967, not long after the band broke up.


Some links that have cropped up since I wrote that post:

Photo from an Abbie Hoffman book.

New York Times article scan from June 9, 1967, reporting on a show at the Central Park Bandshell with the Group Image and the Grateful Dead.  "A combo called the Group Image--five electric guitars plus drums--achieved a sound at times that suggested a derailed freight train plunging over a cliff."

1967 article from the first issue of the Avatar, Boston's underground newspaper.

"New York 'Hippies' Find Wonderland," a June 21, 1967 article from the Nashua (New Hampshire) Telegraph (via Google News).  "The Group Image is the most ambitious and vigorous of the families. It has its own rock band beginning to play uptown discotheques for $2,000 weekend fees, a graphics shop that does the band's publicity and subcontracts work for other firms, a darkroom, an interest in the publication of a psychedelic magazine and even a corporate name--Group Image Enterprises."


A couple of weeks ago, reader IM left a comment on that earlier post which sheds some light on the Palm Gardens: "I found a 1939 photo of part of the Palm Gardens at http://tinyurl.com/62jsauw (the first of the two photos). The sign out front says "Palm Garden To Rent for Balls Receptions Entertainments Conventions etc. Large Stage" and more that's too small to read. According to Certificates of Occupancy going back to 1922 the second floor was a balcony. I'm guessing in 1967 it was the same building considering it had been a dance hall for so many years. Whatever was there in 2004 was torn down and replaced by a 42-story luxury condo tower. sigh..."


Now, on to the ads and clippings. 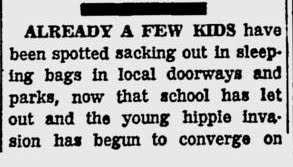 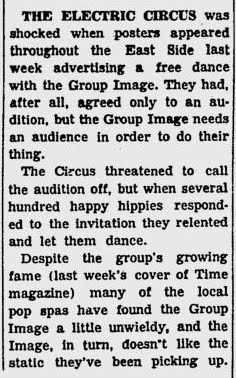 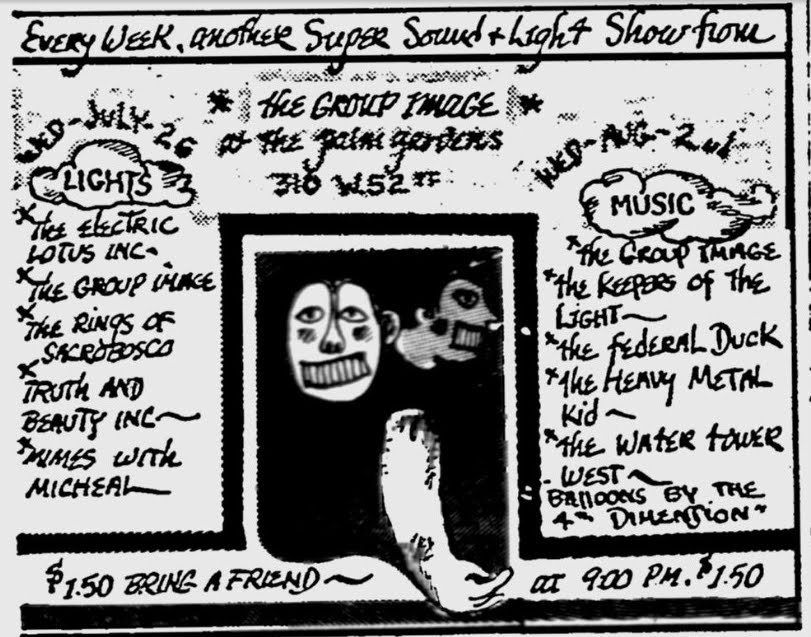 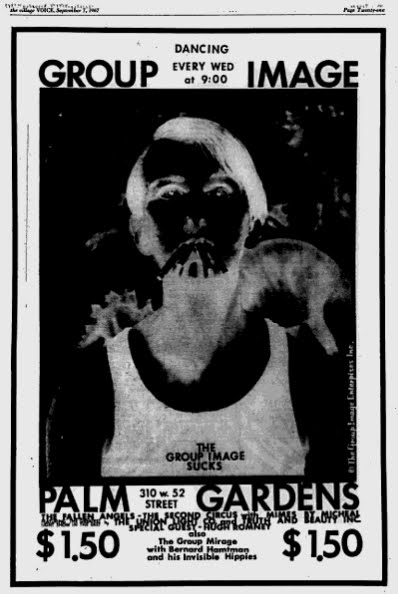 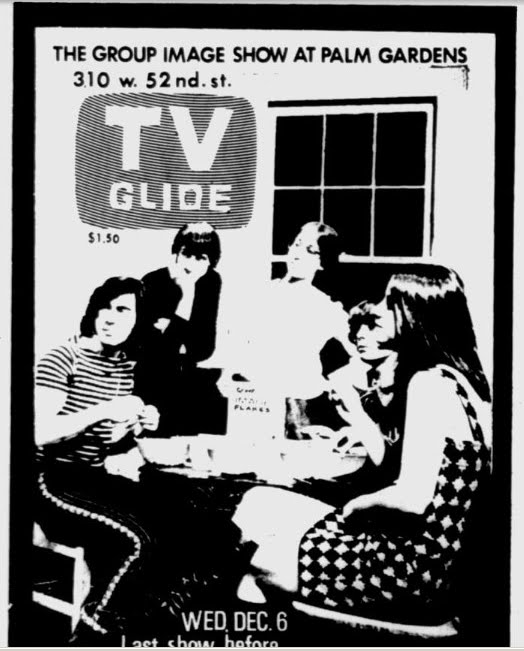 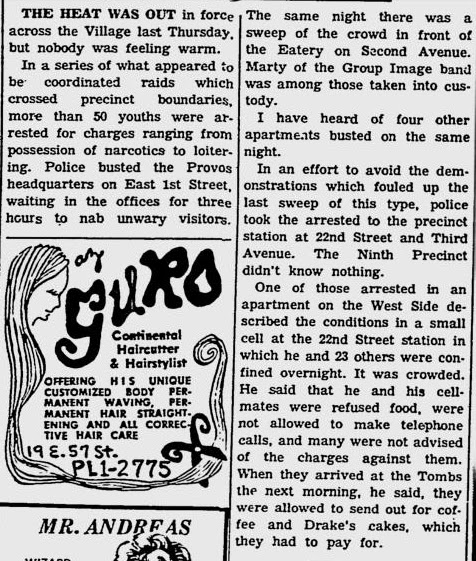 Other mentions in the '67 Voice:

5/4/67 issue:  "New Sound to the East: Living Out McLuhan"--a profile of the Group Image.  Includes a dark photo, and a description of a show they did at the Balloon Farm, which apparently was the last event held there before its closure and conversion to the Electric Circus.

6/8/67 issue:  "The Youthquake and the Shook-Up Park"--confrontations between hippies and police in Tompkins Square.  The Group Image and the Grateful Dead are mentioned.

9/21/67 issue: "Scenes" mentions that the Group Image designed the sign for the Digger Free Store.

10/19/67 issue: "Love: A Groovy Idea While He Lasted."  In the wake of the East Village's most notorious hippie double murder, the dark side of life in the area is examined. "Like generations of Lower East Siders before them, the Group Image wants to move to the country."

Flash forward a few years with this NPR feature on Will Hermes' Love Goes to Buildings on Fire.

Let me know what you think!