9/4/69 "Riffs" review for Mountain and Colosseum (nearest link was to the "Scenes" column a couple of pages afterwards).

11/13/69 "Riffs" review for Elvin Bishop and other blues shows that had taken place there in previous weeks (links to nearby ad).

My earlier posts on '69 Ungano's ads.  (Click on the Ungano's label below or on the right for more posts about the club.)

The only Ungano's clips I could find on YT feature the Stooges in Nineteen-Seventy, O.K?

The Ritz Theatre on Staten Island, also known as Ungano's Ritz (I heard that the Unganos were brothers who worked for Con-Ed), opened in early 1970 and had shows until August '72 (as far as I can tell).
Below is a partial listing of shows there.  I also attached some pics of a ticket stub and some ads in the local paper (the Staten Island Advance).
Bill Fitzgerald

A reprint of an Staten Island Advance article from 12/28/69 mentions a Staten Islander named Paul Margarella as being the prime force behind its transformation from an abandoned movie theater to a Fillmore East style concert hall.  It operated as a movie theater from 1931 to June 1968.


BTW - there was a rock club called The Factory on Staten Island in the late 70's.  It was part of the old S.S. White Factory in the Princes Bay section of Staten Island.  SS White moved to NJ and the building was used a mini-mall and had the club called The Factory.  It had some mid-level acts; I saw The Ramones and Johnny Winter there in 1979.  It was open from 1977 to 1980. 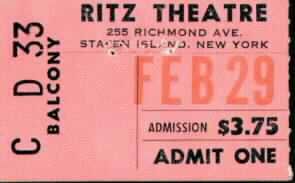