UNGANO'S--210 West 70th Street, between Amsterdam and West End Avenues. Haven't been able to find much background info about this late '60s/early '70s club or its proprietors, brothers Arnie and Nicky Ungano. Most of the show dates I've found range from '69-'71, but Genya Ravan recalls playing there as early as '64 in her memoirs, Lollipop Lounge (New York: Billboard Books, 2004). She describes it as "yet another Italian-owned club," and infers that such joints were no strangers to mob-related activity. A spectropop.com article about the Dickens (mock-rock alter egos of NRBQ) describes the place as "a cozy showcase club," while an R. Meltzer tribute on thedictators.com dubs it "a hepster basement rock club." A contributor to this George Harrison condolence page--who met the Quiet Beatle at the club in 1970--remembered it as "a place where 'name' artists could play, and also where A&R reps and agents would go to see talent auditions." As Mike Fornatale explained a while back on the Bomp list:

In 1966 and '67, when out-of-town bands came to NYC, they would do shows at places like Ungano's and the original Peppermint Lounge, that were really holdovers of the Copacabana era and not so very unlike this "vibe" (maaaan) at all. [He's referring to the scene at the Hard Rock Cafe during its launch party for Little Steven's Underground Garage.--Ed.] (Once they turned on the three-dollar color-wheel lights, that is.) The only difference here is that the Hard Rock Cafe has a fifty-foot ceiling and the lights cost three THOUSAND dollars each.

Both the club and the theater attracted a surprisingly impressive array of the era's talent, including:

A Staten Island local on cinematreasures.org remembers seeing "Alice Cooper, Mountain, Black Sabbath, Yes, Capt. Beefheart, MC5, King Crimson, The Kinks, Fleetwood Mac, Deep Purple...even Vanilla Fudge" at Ungano's Ritz. He adds, "The Ritz concerts did not last to due 'contract riders' put into place in the early seventies by NYC concert promoters. They insisted that the musicians performing at their place could not book additional shows within a 50 mile radius of the venue nor within a month surrrounding the show. This essentially killed the bookings for national recording acts at the Ritz Theater." Apparently the building went on to become a roller rink, but since 1985 it has been occupied by Pedulla Ceramic Tile. What became of the basement of 210 W. 70th Street is unclear. The building as a whole was, and may still be, the Bradford Hotel, but seems to also house various other businesses.

[UPDATE 5/6/2010: Here are a couple of Ungano's ads unearthed by a long-time Internet pal of mine, the eagle-eyed Rob B. Jeez, this piece seems skimpy--I should really see if more info has come forth. The daughter of one of the proprietors contacted me quite a while ago, offering answers to any questions I might have...unfortunately I was too shy and too preoccupied with non-blog matters at the time to fully take her up on it, and I fear the offer may have expired by now.] 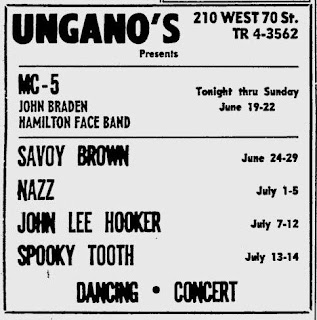 Ungano's....after I read your post I knew why that name was familiar to me, of course if I was there once with a group of friends

i am one of the fortunate ones that hung out at the big three,Ondine's,The Scene,Ungano's in the day.
How does one even attempt to describe what it was like back in the day when the Bands,let alone the jams that happened wee beyond belief.
i can go on forever but one or two or more catch my mind.
Mick Fleetwood,John McVie,Peter Green,Buddy Miles,Janis Joplin,Randy Hobbs and Jimi Hendrix.What a night that was!!!!

if you want to include Ondine's then it should be the big four--Cafe Au Go Go was one of the happenin clubs in the city in the 60's.

I saw Capt Beefheart at Ungano's several nights in a row in 1971... My music teacher Carmen Moore introduced us to Ornette Coleman who said, "Don't you know Don Beefheart"? These were wonderful gigs with his classic Magic Band...supporting Lick My Decals Off Baby... He'd had his equipment stolen and Ornette lent him a horn as I recall... a great venue...!

Hi Streets,
I'm writing The Encyclopedia Of Jerry Garcia Music Venues. I'm interested in writing to the daughter of the owner of Ungano's. Can you put me in touch with her?

I loved Unganos, and one night after band practice, I went to the club with my bass, rather than going all the way home to drop the bass off, then go back to the club. I was sitting there in the crowd, when Jimi Hendrix and Buddy Miles got up on stage...Jimi said he wanted to do a little jam with Buddy, but didn't have a bass player...I shouted.. Bass right here...We did three songs in that Jam, and I was wondering if anyone has ever saw or filmed/ taken any pics of any jams with Jimi and Buddy with that unkown teenage bass player...from about 1969-1970 or so...I'd love to find out...
Romeo Maxx

I just saw this article on Ungano's, and couldn't believe it. Brought back some old memories. Your list of bands is missing the one which opened the club in the summer of 1966. It was The Others (I was lead guitar player), who had been the house band at Scott Muni's Rolling Stone the previous summer. A couple of the guys who worked at Unganos's had been regulars at The Rolling Stone. They were instrumental in our getting that gig. Ungano's was visited by people like Little Richard, and the Detroit Wheels.

Wow, hadn't thought of Ungano's in many years!

Here's a painting by the NYC artist Joseph Armato that captures the spirit of being at Ungano's in 1967. Must have left an impression since the word UNGANOS is actually etched into the paint. Subject to interpretation but appears like a dancer as seen through the psychedelic haze of those wild and crazy times.

My good friend Laura & I were following the Vagrants around at the time. During the transition from Vagrants-to-Mountain, Leslie West played there for several weekends in 1970. I have some of it recorded on little 3 inch reel tapes, all of appalling quality...
One overlooked act that also made it's NY debut was Terry Reid. I think he was 18 or 19 yrs old then, and a force to be reckoned with. Unfortunately, his career took a backseat to others, such as Eddie Money...
Ungano's was definitely the darkest, dankest most depressing venue, probably in all of Manhattan. It was most likely this particular atmosphere that drew in all the "big" names who jammed there on off nights. Anonymity (along with other drugs) was much sought after during those times...

Id love to see any photos or paintings from 1967. I went there alot at 16 with fake id

It wont come up