The proprietors were a bespectacled Spanish couple, Alberto and Sonia Camarasa--two of the friendliest rock & roll freaks you were ever likely to meet. They were always quick with a smile, a hug, a candid behind-the-scenes anecdote, and recommendations for the best shows/DJ nights in town and the latest (or oldest!) records you couldn't afford not to buy. With their European connections, they had a good line on imports, particularly Spanish labels like Munster. Some complained that they overpriced certain items, but I never found that to be the case--other stores were far more outrageous (Bleecker Bob's, anyone?), and you haven't really overpaid for records until you've shopped for them in Canada. Granted, Wows!ville wasn't the most modern or professional of retail operations. They never got around to accepting credit cards, didn't seem to have a computerized inventory system, and might be inclined to ask a regular customer to mind the shop for a minute if they needed to make a quick run to the nearest deli. But Wows!ville had more heart, soul, personality, and passion than most other downtown hipster emporia put together. Surly, High Fidelity-style attitude? Not here, bud--unless you acted like an asshole first.

About a year after I moved to Toronto, my mother sent me a clipping from Newsday about the Camarasas, dated July 24, 2002. Here's an excerpt from the article, written by Marc Ferris:

Totally Devoted to the Ramones: Spanish Couple from Elmhurst hosts fans of band at East Village Store.
Sonia Camarasa practically lives for the Ramones. She and her husband, Alberto, both from Spain, own a small East Village record store that has become a gathering spot for the band's fans. And her Ramones-infused collection of memorabilia is taking over their apartment in Elmhurst. She recently helped with the campaign to name a stretch of East 2nd Street in Manhattan after Joey Ramone. And sometimes, when she feels depressed, she even heads to Forest Hills High School and other scenes from the band's past. "If I'm not their biggest fan, then I'm really close," Sonia, 27, said. The Camarasas, fans of the band since their teen years, are recent emigres who came to the city to bask in the afterglow of 1970s New York punk rock. "That's why we're here," Alberto, 29, said...Three years ago, the day after getting married in Spain, the Camarasas opened their emporium. The Second Avenue chocolate shop run by the Queens branch of Sonia's family had become a burden when the couple opened Wows!ville, a spartan space named after an obscure 1950s tune and specializing in vinyl by post-World War II garage bands. [Are there any other kind? -Ed.] Alberto takes care of the enterprise's day-to-day operations, freeing Sonia to do her stained glass sculptures and write songs on guitar for her fledgling band. The display window has clay figures of the Ramones carved by an Italian fan, a Joey Ramone bobblehead doll and a handwritten sign commemorating Dee Dee Ramone as "King Fun-King Forever." Ramones t-shirts, videos, albums and general kitsch make up a fourth of the store's revenue. The business breaks even because rent is below market rate and making money is not the couple's primary goal, they said. "It's the music that we love, and it all came from New York," Alberto said.

Wows!ville was a veritable rock & roll rec room. You could hang out for hours both shopping and shooting the shit, and occasionally you could catch a fun in-store show. You could discover a new band, or be discovered, as was the case with the Little Killers. Here's an excerpt from an interview they did with Splendidezine.com.

Andy Maltz: Yeah, in New York there's a record store called Wowsville, which is a place you go and hang out. If you stay there for half an hour, you'll see five people you know. So Tim, who runs Crypt, was there the day before Thanksgiving. A bunch of people were hanging out listening to records. So, Dave, who was in a band called the Tie Reds, he put our recording on, which was, at that point, new. We had just finished it. Tim heard it and really liked it. So he was just like, at the end, he was like...
Sara Nelson: "Play it again."
Andy Maltz: "Play it again." He played it again three times and left with it.
Splendid: So were you there at the time? Or did you hear about it later?
Andy Maltz: No, no, no. I wasn't there. I got a phone message from Alberto, who owns Wowsville. Alberto's from Spain. He's very excitable. And he was like, "Andy, Andy, Andy, someone wants to put out the record." And I didn't know who he was talking about. I didn't want to get my hopes up about it. But I knew that Tim had come by there, so in the best case scenario, it would be him, and it was. It was very much a case of being in the right place at the right time.

Starting in 2002, the party was extended after hours at Wowsville-a-Go-Go, a weekly Friday-night dance bash held at the faux-tiki Lei Lounge in the basement of Niagara at Avenue A & E. 7th Street. DJs El Rey del Wowsville (Alberto's nom de spin), Dos Platos, and other rotating guests spun the platters that splattered, while local garageniks and go-go gals shook their moneymakers with abandon, archaic cabaret laws be damned. It was a cool scene for a while, reminiscent of the old Green Door parties--until the frat boy types started coming around. But it had staying power, and can still be enjoyed today, albeit at a different bar. Here's a description taken from "mah fren'" Blair's concert calendar:

Unfortunately, Alberto can no longer spin at the night he established--and neither can he ever unlock the hot-pink portals of Wowsville again. For reasons I won't go into here, Alberto and Sonia had to move back to Spain--and thus the shop that had so quickly become a beloved New York institution closed in December, 2004. There was a final farewell party at Siberia--its announcement was as follows:

A bittersweet Rock n Roll Bash! DOT DASH PRESENTS Wowsville Records going away party. Thurs December 2: THE LITTLE KILLERS, BLACK LIPS, SHOP FRONTS, DC SNIPERS. At Siberia – 356 W. 40th Street at 9th Avenue, Doors 8:30PM. Cover TBA.
This show is a send off for NYCs ONLY punk rock record store, Wowsville Records on 125 2nd Avenue. Alberto Camarasa and his wife Sonia opened the store 5 years ago this December. The couple moved from Spain and knew no one; in 5 years time, the store became THE punk/garage record store, hangout, meeting spot, make shift happy hour in NYC.
Wowsville was also a shrine to some of NYCs most important bands, especially THE RAMONES – rare vinyl, memorabilia, posters, videos and, of course the photos. The store had an amazing collection of punk photos for sale by Roberta Bayley, Godlis and others. NYC artist and scene-hopper Mark Khostabi painted a recent series honoring his old haunts in the East Village– he decided to include Wowsville in a painting because he felt it too has become a landmark. And Lux Interior and Poison Ivy from the Cramps dropped by their last time in town to say hi and spend some money!
Alberto is also a tireless promoter of bands that he loves – go into his store around the time of a release by a band in his favor and you'd hear it ALL WEEK LONG –he would make people buy new releases by such bands as BLACK LIPS, LITTLE KILLERS, TYRADES, THE SPITS and THE LIDS among many many others. Also, when many of these bands were on tour, they would always make sure to pay a visit. This was the meeting place for the underground punk and garage scene both locally and nationally and it will be sorely missed!

[Just as an aside--another celebrity customer of note was Benicio Del Toro; Alberto proudly showed me his autographed photo the day after he'd dropped a couple hundred there.]

Descriptions/reviews of the store are available here, here, here, and here (yes, I wrote the brief one signed "D.C.").

Scroll about two-thirds down on this page to see a pic of Alberto quaffing a beer with a member of the Vapids.

And here's a "polaprint" of Wowsville's shopfront by Sophie Kim.


I'm told a nail salon now occupies the storefront. Glamourous, maybe. But I'd prefer a more "Dolls at Gem Spa" type of glam in this part of town. 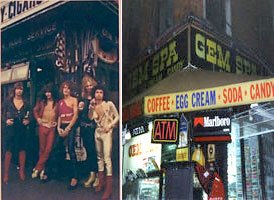 Regarding the snipe about post-WWII garage bands: they could have specialized in post-1960s or post-1970s garage bands. Adding that detail gave the actual time parameter. Why the hate?