Not making good on my promises of more prolificity, am I? Can't help it...TCM was finally added to the Rogers Cable roster a few months ago, and after being denied its bounty for six years I NEED to catch up on my classic flicks.

I've got some research simmering on the backburner, but in the meantime, here are a couple of links I've recently encountered on two interesting NYC music figures, impresario extraordinaire Sid Bernstein and former Magicians member John Townley.
Toronto is about to lose one of its own musical landmarks pretty soon, and since I've long nursed a soft spot for the place I'm feeling quite melancholy over it. (Maybe I have become a semi-Torontonian by osmosis after all.) 'Twas inevitable, and I kinda knew the writing was on the wall at last year's Boxing Day sale, when the traditional free coffee and donuts were not proferred. Jeez, where the hell are we gonna go on Boxing Day now? Ah well, at least it reopened after its bankruptcy woes six years ago, allowing me to squeeze some shopping experience out of its iconic edifice. 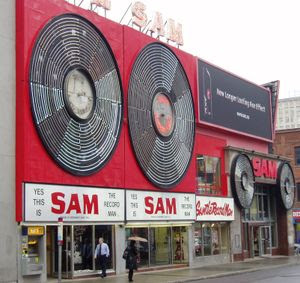 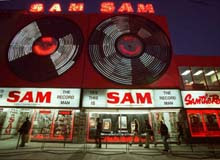 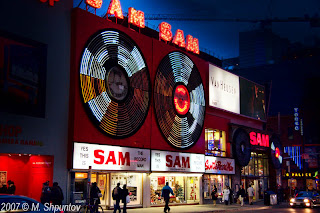 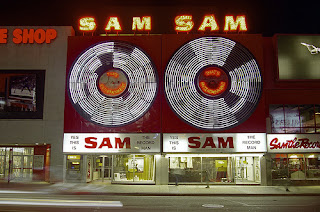 Though long past its prime by the time I moved to T.O. in 2001--its legendary "one cent Saturday" sales and 2nd floor clearance racks bursting with sealed '60s LPs priced at a buck a piece were well extinct at that point--Sam the Record Man still had enough old-school charm left to make me a regular customer. It wasn't just its idiosyncratic name or its gloriously honky-tonk perpetually spinning neon discs that beckoned me. Bottom line, considering its locale in T.O.'s most mainstream shopping area, it had a pretty damn thorough selection of CDs and DVDs. O.K., cetainly not Amoeba-thorough, but I was consistently blown away by how often I'd find items that I should not have expected to find at such a joint. I also loved how down-home the "decor" was--handwritten display case dividers, autographed walls, copious framed photos of Sam Sniderman posing with past music notables, and most evocative of all, ancient linoleum scuffed by the shuffling of many a rekkid collector. I'll live--there are still plenty of other fine record shops elsewhere in the city, downloading be damned for the time being--but my jaunts downtown will be a helluva lot less fun from now on. 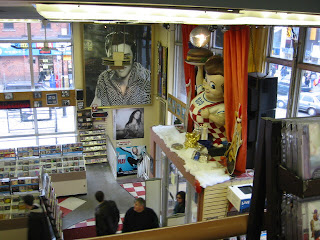 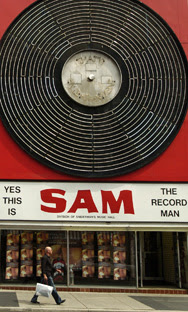 May you stay forever Yonge.