Ondine update: Just found a fantastic "Pop Eye" column by Richard Goldstein in the March 23, 1967 issue of the Village Voice, covering several cool topics: Zal Yanovsky's rep as an informant; the growing use of psychedelics among musicians; the Toronto scene ("the influx of draft dodgers has given that city's hip community the status of an international mecca"); Joe Tex; the Monkees; the Fugs; a review of an attempted series of happenings called "Rock Flows" at the Broadway Central Hotel; and a fabulously evocative account of the atmosphere at Ondine during the Doors' stand that month.


Singer Bowl update: Quite a bit of footage from the Doors show wound up in When You're Strange, as shown on PBS last week. Not so much of the band performing, but you do get to see Morrison mingling with some people in the crowd before the show (including a guy selling Who programs), and of him backstage comforting a girl who got hit with a chair during the melee. I tried to see if there was more on youtube, but no dice...however, I did find audio of "Light My Fire," and of the Who's whole set. 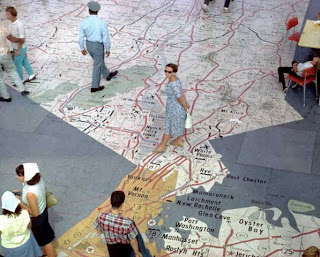 N.Y. State Pavilion update: I went to see Iron Man 2 recently, and much to my surprise a CGI restoration, or should I say re-imagining, of the fairgrounds plays a major part in the film!!! The Unisphere and particularly the Pavilion are prominently featured, as is a scale model for the so-called "1974 Stark Expo," which was basically a replica of a '64 World's Fair scale model as far as I could tell. See the Bowery Boys and the NY Daily News for more details. And here's a report about current efforts to restore the Pavilion.