Cool shock of the morning, via templeoftheblacksun:  this photo of the Anderson Theater. 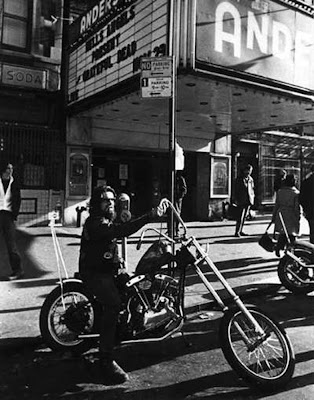 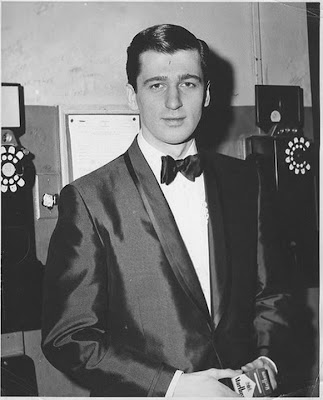 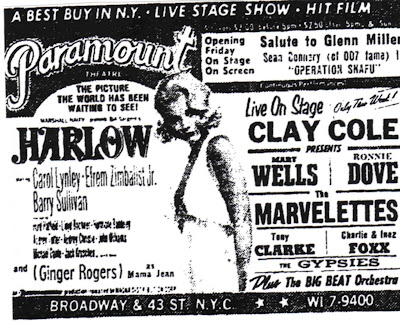 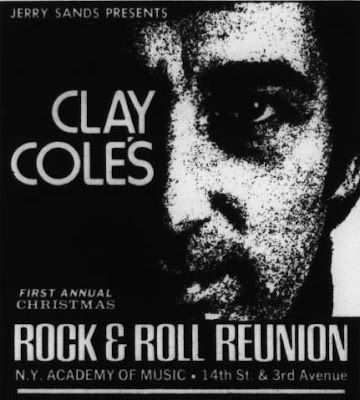 TRAMPS--Since this place has been mentioned a few times over the last couple of years on two of my favorite blogs, The Hound and Dangerous Minds, I've been meaning to do a post on it for a while.  Considering its long lifespan, I haven't found quite as much information on it as I'd expected to, so I'm afraid this piece won't live up to my self-imposed standards of comprehensive detail--but I'll share what I managed to find.


The joint had two incarnations: its intimate 150-seat original spot at 125 East 15th Street (which I'm sorry to say I'm too young to have ever attended), and larger 1,000-capacity digs at 45-51 West 21st Street, opened in 1989.  [A brief NY Times item notes that when the first club closed in 1988, the initial relocation plans were then for a space on Varick Street.]  What I did not know was that the first Tramps opened in 1975, and apparently in its earliest days it was considered something of a cabaret-type venue.  This Billboard article from November 6, 1976 makes it sound a bit like Reno Sweeney, and mentions that the club was getting much music-biz attention for having recently hosted shows by Cathy Chamberlin's Rag and Roll Revue and Stormin' Norman and Suzy.


Owned by Terry Dunne, who would also manage the Nails--and with bookings at the second location handled by Steve Weitzman--Tramps dealt in musical eclecticism and diversity. It featured local and touring acts performing everything from roots rock, country, folk, singer-songwriter stuff, reggae, cajun/zydeco, celtic music (which might help explain the Hound's recollection of the first location as a frequent hangout for the Westies), garage rock, indie rock in all its permutations, hip hop, and the occasional megastar club date-cum-video shoot from the likes of Bruce Springsteen and the E Street Band or Bob Dylan.  Yet even with all this variety, Tramps--the original club in particular--was best known for specializing in blues, R and B, and soul.


Since I spent a fair amount of my '90s nights out at the second Tramps, in researching for this post I was most curious about the first one.  From what I could gather it seemed like a pretty cool scene, one enjoyed by many folks who would eventually form the WFMU/Norton Records axis of rrrreal rock and roll fanpeople-preservationists (my heroes).  But so far I've only found a few factoids about it, most of them culled from the Billboard and New York Magazine archives on Google.


Billboard, July 21, 1979: "Tramps, a fashionable cabaret that has helped launch several artists in that genre, and the Squat Theatre, an off-off Broadway location that has featured predominantly avant-garde plays, have almost simultaneously scheduled a series of appearances by blues artists who haven't breathed the air here in years.  Koko Taylor inaugurated the series June 22 and she's already booked to appear again in August.  Blind John Davis entered the room July 4 and played through Saturday (14).  Otis Rush comes in Wednesday (18) through Sunday (21), to be followed by Eddie Kirkland and others whose dates are still tentative."

Billboard, Oct. 25, 1980:  "Tramps, the center of this new [R and B] activity, has booked Rufus Thomas, Carla Thomas, Solomon Burke, Syl Johnson, and Big Twist and the Mellow Fellows...[Terry Dunne says,] 'We are trying to bring in some of the better known acts, and when people realize how great this music is, there will be more word of mouth.  You have to understand that a lot of these acts have done many Southern tours but have not played Manhattan in many years.  So some are not that well known here.'  Some of the other acts that Dunne has either already booked or is working on booking include Don Covay, Clarence Carter, Eddie Floyd, Chuck Jackson and Joe Tex.  Dunne says he is getting a mostly white audience divided between those who remember the music from the first time around and those who have recently discovered it."

All kidding about "Hot Hot Hot" novelty-ism aside, David Johansen created and honed his Buster Poindexter act at Tramps, as explained in a New York article from May 4, 1987.  "Maybe Poindexter's R and B revivalism...is at home here because Terry Dunne is an ethnomusicologist himself, and Tramps happens to be the best blues and R and B bar in town.  Dunne, an Irishman who moved here in 1968 and worked the minor-rock-club circuit for six years before opening Tramps in 1975, took it upon himself to track down two dozen half-forgotten bluesmen and bring them to the big city."


If you've got any anecdotes that can help expand and vivify this account of the first Tramps (or the second one for that matter), please leave a comment!


Here's a very partial and non-chronological list of folks who performed at Tramps.  I'm feeling a bit too lazy to organize it or add dates and links to all of the references I found, but I will provide links to some of the cooler ones.  [More names are hopefully to come in the future, when/if I get to the ads in later issues of the Voice.  Again, most of these references came from the Billboard archive.]

At my "advanced age" I'm getting really bad at remembering the shows I've been to and where they happened, but a few Tramps gigs I can semi-clearly recall include the Muffs (with the Groovie Ghoulies I think), Thee Headcoats (with the Insomniacs; my addled brain recalls the Makers as another opener, but this NY Times blurb swears it was the Make-Up), the Donnas, Link Wray, Dale Hawkins, and the Swingin' Neckbreakers.  I am certain I was there for more shows, because for a time in the mid-to-late-'90s their bookings were right up my alley--but I'm totally blanking out on the names now.  [I remember a then-friend of mine telling me that Maxwell's/Telstar Records honcho Todd Abramson was involved with the bookings at that point, but I don't know for sure if that's true.]  I must admit I never felt any super-special sentimental fondness for the place.  The sightlines could often be pretty poor with all those columns in the way, and to me the atmosphere usually seemed to lack excitement or electricity.  Still, it was as decent as any mid-size club in town.


Tramps closed in 1999.  Soon it became Centro-Fly, a dance music/hip hop club graced with retro-futuristic op art decor.  When that closed in 2004, it became Duvet, a resto-lounge where patrons ate in beds instead of at tables.  That's no longer operating either--even if it were, I doubt it would get much business these days with NYC bedbugs so bubonic-plague rampant.  I have no idea what, if anything, is on the premises today.  Steve Weitzman went on to handle bookings at the Village Underground and Warsaw...not sure if he's still doing this lately, as the most recent references I've found on him date from 2001.  Apparently Terry Dunne now owns an Irish pub called One and One at 76 E. 1st Street, replete with a swank basement lounge called Nexus.


UPDATE 2/19/2015: Brooklyn Vegan recently published an interview with David Johansen, in which he briefly discusses the Buster Poindexter origin story and Tramps' part in it:  When we first started Poindexter it was down at this place on 15th Street in Gramercy Park called Tramps which was just like a little bar with a backroom where they'd have like Big Joe Turner who would do a residency there and Charles Brown would do a residency there. On Monday, the bar was open but in the back room nothing was going on, and it was the only night of the week where they really didn't have anything going on back there, so I used to hang out there. I was on the road at the time with the David Johansen group, and I was listening to a lot of jump blues like Jimmy Liggins and music like that - the Central Avenue sound, so to speak. I decided I wanted to make a show so I could sing some of this music. I decided I was gonna do four Mondays in that room, and then it became a really hot new thing so we started doing the weekends and it just evolved from there. When we first started in that room, the vibe was really great and it was just in that little room. The thing about the Café Carlyle is it kinda reminds me of that vibe and the intimacy of it where you could just talk and muse on things and sing songs and people are listening, whereas where you're at a concert or an arena it's like "Our next song will be!" (laughs). But in a room like this it's more like "You know, I've been thinking," so it's really where you can talk from your heart and from the top of your head. It's a kind of entertainment. It's not really like anything. It's kind of like its own genre in a way.
Posted by Signed D.C. at 9:58 AM 31 comments:

Cherry Vanilla reading and Q&A from late November at the Lincoln Triangle Barnes and Noble.  Long but fun...I especially enjoyed the Trude Heller's anecdote around the 41 minute mark.