[This is merely an update to a previous post. Normally I just tack this kind of info to the end of my original post on the topic, but since this piece is somewhat lengthy, I figured I'd also give it a separate new post of its own. A harbinger of more fresh content to come, I sincerely hope!] 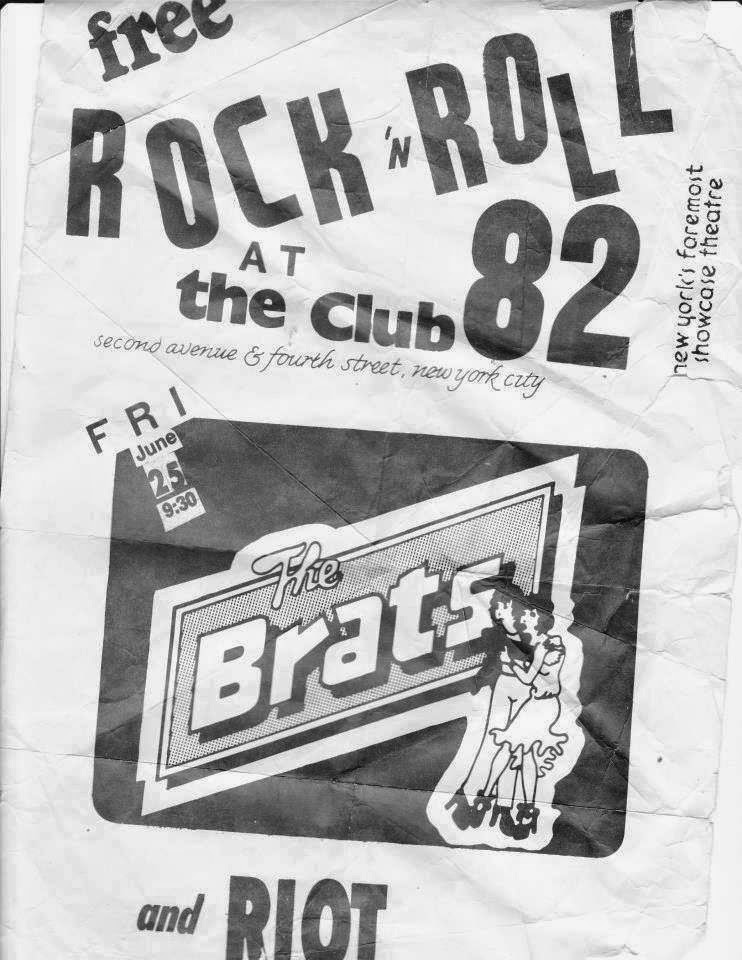 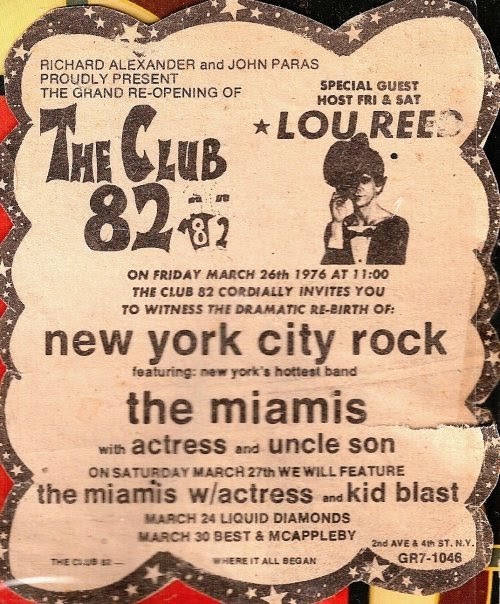 My ancient entry on Club 82 has probably gotten the most criticism of anything I've written here. Too short, too inaccurate, too inauthentic, too unauthoritative. I completely agree, and I'm grateful for all the real-deal first person stories left in the comments section by those lucky enough to have hung out there. [I mean jeez, when I wrote it I didn't even make the connection that Ron Wood's short-lived Woody's, which I'd been very much aware of during its existence, was in the Club 82 space. All I can do is apologize for lack of research oomph that day.] The Bedford + Bowery blog has also helped flesh out the club's story by running a couple of pieces about it over the past year: a mini oral history of the glitter period, and a peek at what occupies it now, the Bijou. Just a few days ago, a reader of this blog wrote a comment about the Bijou. It was accidentally left on an adjacent post about the Hotel Diplomat, so I'll just insert it here.

I recently saw a Guitar Center Sessions show with Blondie, which dates from 2011, but was aired a few months ago on the nearest thing to a music documentary/concert channel we have up here, AUX TV. There were interview segments in between the songs, and to my delight Club 82 was brought up. Since the whole show isn't online, I felt compelled to transcribe the discussion.

Clem:  I saw the Stillettoes play at Club 82, which made me become aware of the two of them [Debbie and Chris]. This Club 82 was around the corner from CBGB.
Chris:  The 82 Club was a fabulous scene. It was in a basement.
Clem:  No one ever talks about Club 82.
Deb:  It was such a great place.
Interviewer:  So let's talk about it.
Chris:  People were fascinated by it here and there, but generally it's not known.
Clem:  It was a gay sort of slash lesbian bar slash trans--
Chris:  It was a tranny bar. It was a transvestite bar.
Clem:  --combination anything goes type of bar, and I dunno if you know, like, in Times Square for instance, the dancers, like, y'know, the topless dancers would dance behind the bar on a platform. And they had a platform like that at Club 82, and that's where the bands would play. The bar would be here [gestures] and the bands would play behind the bar, whether it be the New York Dolls or Wayne County or these guys [the Stillettoes]. And it was basically a dance club, y'know, that had rock and roll one night a week--what night was it, Wednesday night, right?
Chris:  Yeah, that sounds right.
Clem:  That was the rock night.
Chris:  And it was really, but it went way back, to probably even the 1940s. And they had pictures in the background, and there was a picture of Abbott and Costello with a drag queen, that had been taken at the club, and I always wanted to steal it but I regret that I probably didn't. But I dunno what happened to any of that stuff or any of those people.
Clem:  It had the aura of a speakeasy.
Chris:  Yeah, it was just great and funky and had fake palm trees and all this stuff. It was run by all these like hardcore butch old ladies.
Clem:  And all the music was dance music, except for when the New York Dolls or the Neon Boys would play. All the music was dance music otherwise, which kinda, I think it kinda made me get into dance music more, 'cause it was always in the background during punk rock, the way dance music and punk rock started, kinda started happening at the same time in a lotta ways.
Chris:  Yeah, sure.


And I suppose it should come as no surprise that the club is also lovingly mentioned in arguably THEE New York Rock Book of the Year, Paul Zone's Playground (New York: Glitterati, 2014). "Spending my nights at a place like Club 82 was better than anything the mainstream could have offered. It was a drag club in the sixties that became a glitter rock hangout in the early seventies without any redecorating: the ruffled glitter valence curtains, backdrop, and three-sided wraparound stage framed our glamorous icons perfectly."  [I don't think the 82 was mentioned at all in Chris Stein's Negative, but it's still a New York Rock Book contender.]


UPDATE 12/8/2014:  Marky Ramone has a book coming out next month. As part of the advance publicity, Bedford + Bowery did a cool post on his favorite East Village clubs of yore, including the 82.
Posted by Signed D.C. at 2:21 PM 15 comments: